South Texas has a long growing season, plentiful meats, feathered and furred game, and lots of space to grow and roam.  Why has it been so hard to find it?  I had an opportunity to meet CIA-trained  Chef Steve McHugh after a demo at the Pearl Farmer’s Market.  He may be planting the flag for San Antonio’s late- blooming local-food movement.  Having grown up on a Wisconsin farm, Chef McHugh knows a thing or two about how great local, fresh-from-the-farm produce can taste.  He sources many of his ingredients for Lüke from vendors at Pearl, all of whom are within 150 miles of San Antonio.  The salad he made at the market, which is on the menu, included Humble House baby blue cheese – some of the prettiest I’ve ever seen – snuggled up next to chili-spiced pistachios and candied beets.  I looked over the menus and decided we would cancel our lunch reservations to eat at the three-week-old bistro, Lüke.

Lüke, on the Riverwalk, is the new sister to the original in New Orleans.  As a John Besh restaurant, Lüke has definite French Quarter flavor.  But there are menu touches here and there that make you remember you are in South Texas.

We started with cocktails, a French “75” for me and a Sazerac for Hades.

To start, I couldn’t resist the pâté de campagne of wild boar.  Served with watermelon pickles, mustard and a gelee, the pâté was luscious spread on crispy olive oil toasts.  Equally intriguing in terms of a first course would have been the fried Texas quail, which I will be sure to try next visit.

Hades ordered from the express lunch menu, which included a cup of soup.  He wisely chose the shrimp and sausage gumbo.  I have never had such a velvety smooth soup as this.  When you think gumbo, you think rough and ready, a hardy soup.  This was filling and lovely,with big chunks of shrimp and housemade sausage, but refined in the most beautifully and technically balanced way.  The gumbo, while spicy, was skillfully done.  The heat was primarily the last part of each bite, with the heat far in the back of your mouth, which allowed you to taste and enjoy every single other flavor in the soup.  I would say it was my favorite part of the meal, but they’re all God’s children.

I ordered the pressed “cochon de lait” poboy: a pressed suckling pig sandwich.  Yes.  Yes, I did.  Oh goodness it was good.  Perfect on its own, the poboy is served with a delicious cherry mustard that I forgot to use half the time in my eagerness to eat more pig.  Crispy, potato-y fries were served alongside in a yesterday’s menu-lined mint julep cup.  Very bistro. 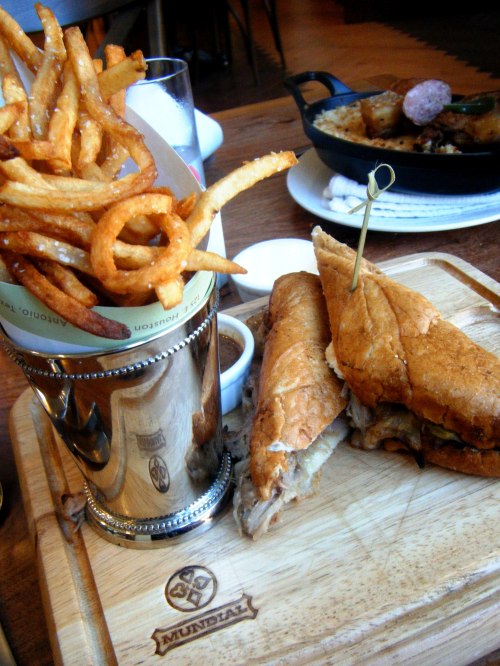 Hades ordered the duck cassoulet.  One of the great things about this dish is that it’s a bistro dish, but it’s also very seasonal.  And in this case, quite local, as well.  Tender white beans were topped with panko bread crumbs that supported a beautiful leg not just of duck confit, but smoked duck confit.   Housemade garlic sausage and a hunk of pork belly with an inch and a half of crispy, crispy fat completed the dish.  It was kind of dueling forks for a while.

We finished the meal with the bread pudding.   I’m told that this is a John Besh family recipe, and a lovely picture says more than I could.

What’s great about Lüke is that it keeps true to its New Orleans roots, but makes a real effort to put forward some progressive, inventive South Texas cusine.  Chef Steve McHugh’s committment to local sourcing will surely keep the dishes seasonal, while his skill in the kitchen honors the Texas farmers who produce it.  And that’s a pretty good place to start.

3 thoughts on “Dining Out | Lunch at Lüke”

Our marriage is old enough to drink! Cheers! 🥂 🍻
Baby girl is headed to high school. Celebrated with family style Italian at @mummamariashouse just like Aunt Judy would make. (You gotta go. Mr. G treats you like family - you leave stuffed and happy.)
Welcome back, y’all! So glad to be here again!
Somebody’s real happy about the newly installed a/c. I still love this boy best. Adorable new cat or no.
Please meet Birdie. We’re excited to add her to our family. She’s Marlowe’s. And Raylan almost doesn’t even mind. Almost.
Came across these at just the right time. Happy birthday, @marloweisobel. We love you, kitten.