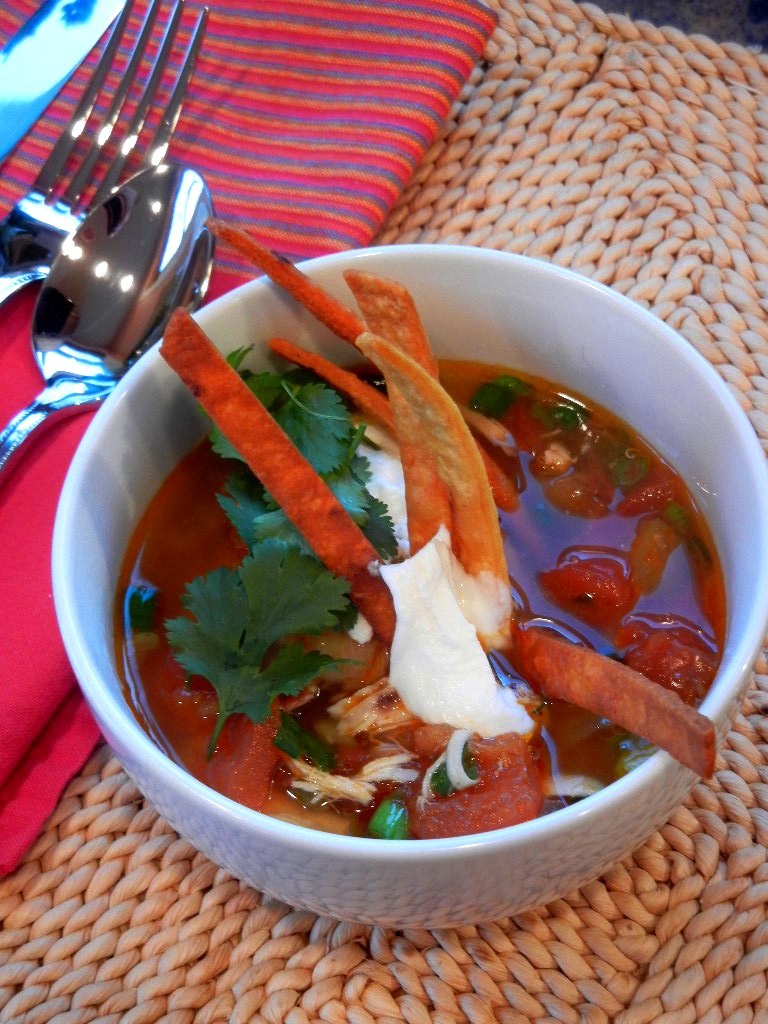 Eating soup when it’s hot out can strike people as odd.  But think French-inspired Pho in steamy Vietnam, or British-influenced Mulligatawny in India.  There’s a point to eating something hot and spicy when it’s hot out: it makes you sweat (I glow).  And that helps you cool off.  So while it may seem counter-intuitive, now is certainly the season to give some spicy soup a go.

It’s always hot in Texas.  So it’s not surprising that tortilla soup is on just about every menu you peruse in San Antonio.   There’s something about it that San Antonians can’t seem to get enough of, no matter the season.   Perhaps it’s the mix of textures, but like Pho and Mulligatawny, it’s spicy and hot and a treat to eat.  (It also happens to the be the exact thing I was eating when Hades first fell in love with me fifteen years ago.  I even spilled it all over myself and he still loved me.  Magical stuff this is.)  And summertime is when the produce that comprises the bulk of the ingredients for tortilla soup are at their peak.

I like to play around with ingredients: if there’s corn, add some, if there’s not, no worries.  Zucchini and summer squashes work wonderfully, too.  Tomatoes, however are a requirement.  And while it can be made vegetarian, I do love chicken in mine.  Bone-in, skin-on chicken thighs add the right amount of richness.  And for serving, it’s all about the garnishes.  It’s a little like customizing a hot rod.  Any or all of the following are fantastic: sour cream, crispy corn tortilla strips (mandatory), coriander, cotija or shredded cheddar, green onions, sliced peppers, lime wedges, sriracha.

Eat some with someone you love and cool off during hot, hot summer.

Persephone’s Tortilla Soup, serves four to six as a first course, two to three as a main dish

Vegetable or chicken stock, if you have some homemade, otherwise just water is fine

2 to 4 cups of summer vegetables (such as squash, zucchini, corn) chopped into bite-sized pieces, if using

In a deep pot with a lid, heat a tablespoon or so of olive oil over medium heat and add the chicken skin side down and season with salt and pepper.  Cook for eight or nine minutes a side turning occasionally, until the juices run clear.  Feel free to put the lid on part of the way through, turning the heat a bit lower to speed up the process.  Remove and set the chicken aside until it is cool enough to handle. Then shred or chop.

In the same pan that the chicken was cooked, add the onion, bell pepper and garlic and saute over medium heat until the onions are translucent, about five to seven minutes.  Sprinkle over the cumin and chili powder and stir to coat the vegetables; cook for one minute.  Add in the chopped tomatoes, with all their juice and stir to combine.  Add the chicken back in and then stock or water to cover.  Bring to a boil and reduce heat to medium low.  Simmer for at least 15 minutes, but as much as an hour.

While the soup is cooking:

In a wide shallow pan, add oil until it is 1/2 to 3/4 of an inch deep.  Heat over medium heat until the oil starts to shimmer.  Add the tortilla strips in batches and stir and turn over frequently until an even golden brown.  Remove to a paper towel and season with salt while the strips are still hot.

About ten minutes before you are ready to serve, add in the chopped summer vegetables and cook until crisp tender.  Taste for seasoning once again and adjust salt and pepper.

Ladle into bowls and serve with garnishes described above.

One thought on “Despite the Heat | Tortilla Soup”