Sunday dinner with the family is important to me.  It’s a time when the extended family  is invited (tonight it was Cronus and Rhea) and everyone partakes of a leisurely meal.  It’s a great thing for Cherub, who is three: she gets to practice her table manners and eat something the whole family is enjoying.

For Local Foods Week, I thought chicken would make for a good Sunday dinner.  As it turns out, Hill Family Farm is in Xenia, about an hour away.  We bought a whole bird and decided to take it the French country route, a riff on a Coq au Vin.  Anthony Bourdain’s recipe in the les Halles Cookbook was a jumping off point.  I used Ohio wines for marinating and for the table.  Since we purchased our bird at Dorothy Lane Market, what better musical inspiration than Dayton’s Guided by Voices.

Hades has hung with Franz Liszt; gave the odd tip to Stravinsky.  He’s held his own with Shane MacGowan, and there’s a rumor that he wrote the bassline to “Love Will Tear Us Apart.”  In short, he knows music.  He cannot impress upon me the greatness of Guided by Voices often enough.  Its time to rock.  Ladies and gentlemen, please welcome, Ohio’s own, Needmore Chicken!

1 whole roasting chicken, giblets removed and reserved for another use

2 parsnips, sliced (ours were from the backyard)

4 green onions, white parts only, sliced in two lengthwise (we were late to the farmer’s market, feel free to use a whole diced onion)

In a large bowl that will hold the chicken comfortably, combine all ingredients.  Cover with plastic wrap, refrigerate overnight to 24 hours.

After marinating, remove chicken and pat dry with paper towels.  Season inside and out with salt and pepper.

Remove the bouquet garni, and strain the solids out of the marinade, reserving each seperately.  In a large, heavy lidded pot, add 2T of butter and heat over medium high heat until almost smoking.

Place the chicken in the pot and sear on all sides until golden brown, turning as needed.  Remove chicken from the pot and set aside.  Tip in reserved vegtables from the marinade and cook until softened, about three to five minutes.  Sprinkle the vegetables with 1T of flour and stir to coat, cook for another minute.  Add back in the chicken, pour in the marinade.  Bring to a low boil, reduce heat to very low, cover and simmer for an hour and 15 minutes.

In a small skillet, render the bacon ends until crisp.  Remove bacon with a slotted spoon to a paper towel lined plate.  Keeping only 1 T of bacon drippings, heat over medium high heat and add in the mushrooms.  Sear until browned, remove to same paper towel lined plate as the bacon.  In the same pan, add in the shallots or onions, along with the salt, sugar and water to cover.  Cut a piece of parchment or wax paper to cover the pan, reduce heat to low and cook until the liquid is evaporated and the shallots are carmelized a bit.  Add in two ladlefuls of the cooking liquid from the chicken and reduce until syrupy.  Remove from heat.

When finished cooking, remove the chicken from the sauce and place on a cutting board to slice up.  Strain the liquid from the pot and add to the skillet with the reduction.  Mix in the bacon and mushrooms, remove from heat and whisk in 1 to 2 tablespoons of butter to finish the sauce. 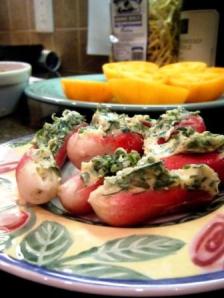 A simple, elegant appetizer for this meal, or any meal, let’s be honest, is French breakfast radishes with herb butter.  The butter was from Snowville cream, and mixed with backyard herbs (this time, parsley, tarragon, rosemary, basil, and green onion).

Serve with egg noodles and Provencal tomatoes (tomatoes halved and stuffed with breadcrumbs, parsely, garlic and chopped tomatoes).  Pour a ladle of sauce over the noodles for good measure.

Meal notes: breadcrumbs for the tomatoes were from the left over biscuits from this morning.  Noodles were from Mrs. Miller’s Homemade Noodles, Fredrickstown, Ohio.  Herbs were from Cronus’s garden.  All other sourcing can be found on the Farms and Producers page.  Wine served with dinner was a 2008 Syrah from Kinkead Ridge, Ripley, Ohio.

Playlist included Bulldog Skin because it totally rocks and it’s my personal favorite GBV, unless you count My Valuable Hunting Knife…

I like being the shortest.
We’ve got a high schooler. #letmeclosemyeyesforthisone
Our marriage is old enough to drink! Cheers! 🥂 🍻
Baby girl is headed to high school. Celebrated with family style Italian at @mummamariashouse just like Aunt Judy would make. (You gotta go. Mr. G treats you like family - you leave stuffed and happy.)
Welcome back, y’all! So glad to be here again!
Somebody’s real happy about the newly installed a/c. I still love this boy best. Adorable new cat or no.