Hades, Cherub and I headed to Johnstown this afternoon for some fun on the farm. Cherub enjoys chasing the chickens and enticing Jewel the farm dog to play fetch.

Hades and I were looking forward to the organic, grass-fed beef burgers for which Farmer Jensen is famous.

While once again it managed to rain when we were there (same as the Slow Food dinner back August), but the rain never seems to dampen anyone’s spirits when they’re there. Dinner was pot luck, so I brought along a green bean and tomato salad from all the produce loveliness we bought this morning. Original credit for this salad goes to Chef Brian Polcyn, cited in Ruhlman’s Soul of a Chef.

This is an easy salad that is great for entertaining and for pot luck meals like this one.  And it could hardly be more local. 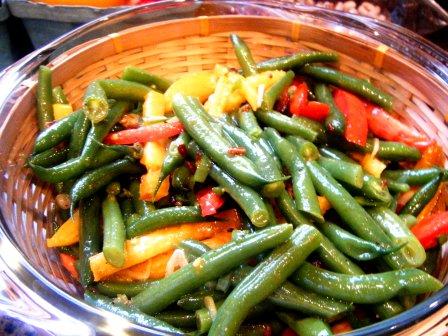 1 Roma tomato, sliced in strips the approximate size as the beans (Wishwell)

In a large pot of heavily salted boiling water, cook the beans for 3 to 4 minutes, or until just done. Remove the beans from the water to a bowl of ice water to stop the cooking.

Render the chopped bacon ends until crispy. Remove to a plate lined with a paper towel. Reserve the drippings. Yes. Do it.

In a large bowl, combine the bacon fat, 1/8 c grapeseed oil, 1/8 apple cider vinegar and the salt and pepper. Whisk to combine. Add the beans (that have been drained and dried slightly), yellow and red tomatoes, green onion, and crispy bacon. Mix lightly to keep the tomatoes in strips.

For more pictures of Slow Foods Columbus‘s Shake the Hand That Feeds You Dinner, check the Ely Brothers’ Facebook album.