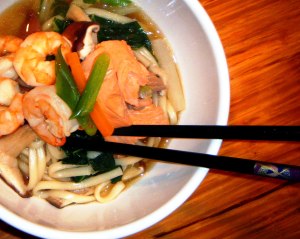 We do a lot of Asian cooking here in Persephone’s Kitchen.  I’ve said before that I regularly whip up some version of a stir-fry noodle dish once a week.  I love them because they’re so fast and so delicious.  But I think I found a new secret weapon to really improving the flavor of my dishes.

Two ingredients that can be purchased not just at an Asian supermarket like Tensuke here in Columbus, but at Whole Foods: bonito flakes and kombu.  I know, these ingredients have been around, well, thousands of years.  But that such a simple solution to authentic flavor for my Japanese noodle dishes could be found so easily and took the addition of almost no time to dinner has just left me kind of giddy.  Yes, let’s all discuss it again: Persephone is such a nerd.  Laugh if you want, but dinner tonight took about 20 minutes and had a depth of flavor that was almost staggering.  So there.

Ichiban-Dashi with Salmon, Shrimp and Noodles, serves 2 to 3

8 cups of water (although I used a lovely vegetable stock, water is just fine)

1 bundle of udon noodles (I have some that take 12 minutes, check your package, yours might take less time, add them in at the right time)

In wide, deep pan, add the water and the kombu.  Over medium heat, bring to a boil.  Add the bonito flakes.  Turn off the heat, let the flakes settle to the bottom of the pot.  Strain the solids and return to the same pan.  Add in the soy sauce and mirin.  Taste and adjust seasoning. Bring up to a nice low simmer: bubbles, but not boiling away like mad.  Set a timer for 12 minutes.  Add in the salmon and udon.  At ten, add the carrots.  At eight, add the green onions and mushrooms.  At six, add the bok choy ribs, reserving the leafy greens. At five, add the shrimp. At four, add the daikon and remove the salmon to remove the skin, if you have a piece with skin, and flake into large pieces.  Return to the pan.  At two, add in the green tops from the bok choy.  Simmer the rest of the time.  Taste for seasoning and add a bit more mirin or soy if you think it needs it.  I added a few drops of sesame seed oil just before serving.

Divide between bowls and slurp loudly.  It’s only polite.

6 thoughts on “Two Minute Solution to Elevating Your Game | Dashi”