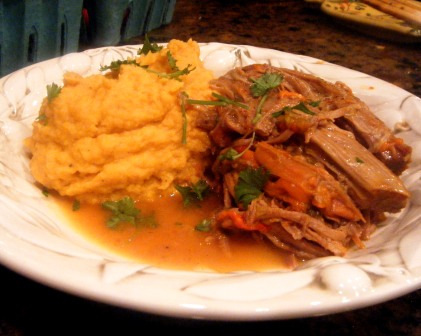 I can’t tell you how much I love short ribs.  They’re cheap, they’re easy to prepare, and with a little forward planning, they’ll give you more flavor than cuts that are five times the price.  Unfortunately, they’re also terribly underutilized in the home kitchen.  Even if you aren’t that comfy in the kitchen, they are very forgiving.  So go ahead and keep your filets – this unsung cut is the one for me.

For this dish I used grass-fed short ribs from Flying J Farm, which were second to none.  They were dense and meaty, with just the right amount of fat for succulence.  And marvelously bordering on just a bit wild tasting because of the grass diet.  Just remember: low heat, long time, and you’ll have a smile on your face at the dinner table.

3 pounds of grass-fed, Flying J short ribs, or grass-fed if you’re not from Ohio

To get started add a thwack (that would be a heaping tablespoon, more or less) of bacon fat to a large, heavy-lidded roasting pan.  Turn up the heat pretty high.  Generously salt and pepper the ribs, then add them to the pan, searing on both sides.  I must emphasize two points here: 1.  Sear them until they begin to brown, and 2.  Do this in batches so as not to crowd the pan.  I will repeat:  do not crowd the pan.  Stack your ribs on a plate and set them aside.

Turn the heat way down, and add the onion, the chili, and the garlic.  Scrape the bottom of the pan somewhat obsessively to release all that goodness.  When soft, then add the peppers and tomatoes, and soften them somewhat.  Then put the ribs back in, along with any juices on the plate.  With flair, sprinkle everything with the flour, then add the liquid.

PK Tip:  After last night’s Chicken dish, we had leftover bones.  While cleaning up, I put them in a pasta pot, filled it with water along with some vegetable trimmings (like leek tops, carrot tops, radish tops, the odd tomato), bay, thyme and peppercorns, brought it to a boil, and simmered over low heat for 45 minutes.  Voila…stock.  In all honesty, if at this stage you don’t have stock made this way (or something similar), I would say just use all water and not a boxed stock.

Back to the show:  Place the lid on the pot and place in the oven at 300˚.  Two and a half hours is an absolute minimum.  Three is better, Four better still.  When it’s done, pull out the bones (won’t be hard – and save them!  That’s beef stock!), skim/remove any fat, and pull the meat apart with two forks.  Lovely.

Meanwhile, you’ll have plenty of time to make the sweet potato mash.  That’s one mammoth Beauregard sweet potato (thank you Northridge Organics), cubed, boiled, drained and mashed.  Add heavy cream, milk, salt and pepper to taste.  At the risk of repeating myself, lovely.  If you’ve got some fresh corriander (that’s cilantro), chop it and sprinkle it over the top, it’s fantastic.

According to James Beard, short ribs are best served with beer.  As a rule, you should never, ever disagree with James Beard.  So Columbus Brewing Company’s Scottish Ale it was.

Playlist included Bloodbuzz Ohio, by The National.  God, I love his voice.

Complete sourcing for local produce used in this meal can be found on the Farms and Producers page.